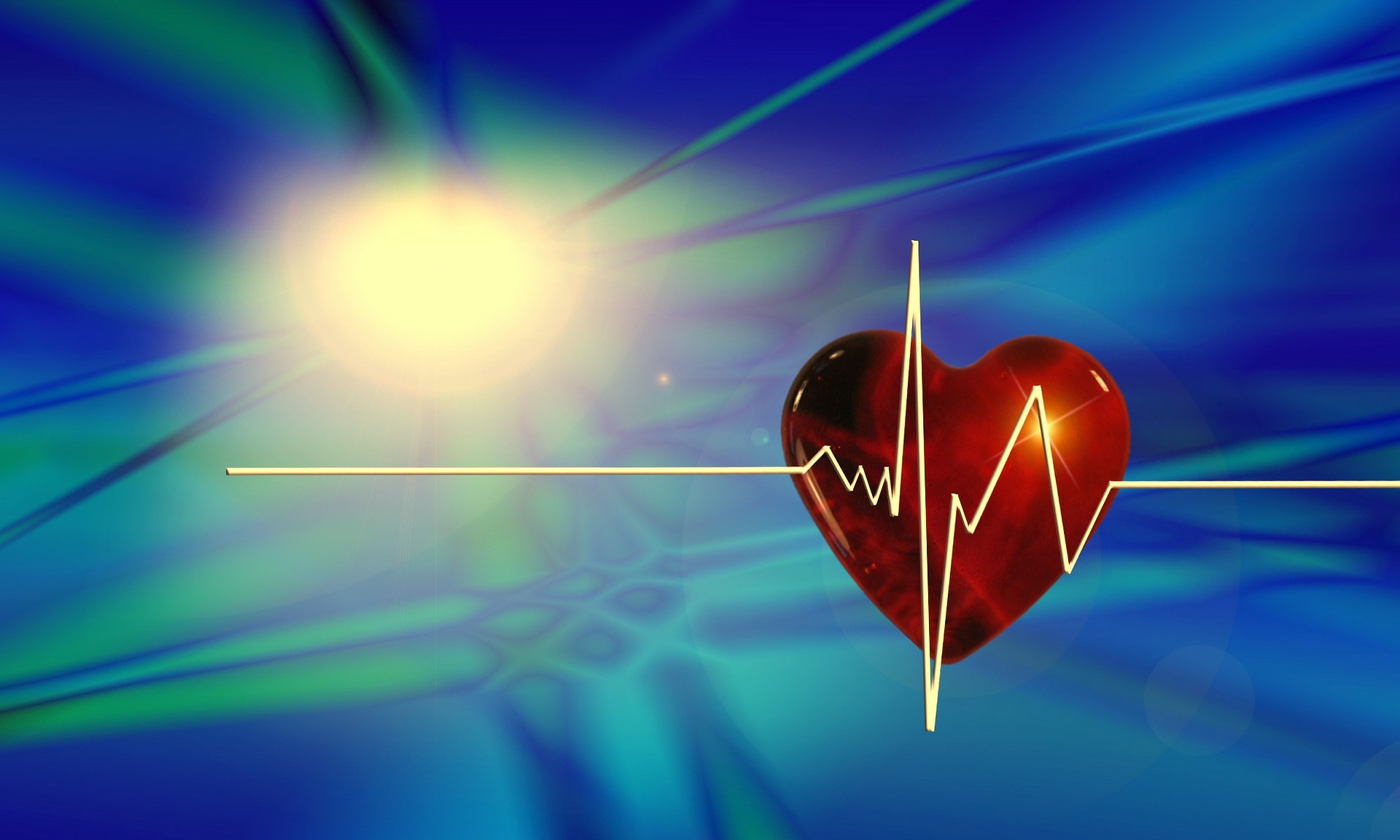 I’ve now been on a low-carbohydrate healthy-fat (LCHF) diet for about nine months.

Outwardly, the results have been amazing. I’ve lost about 25 pounds (currently 168 lbs.), my BMI is 23.43, and my waistline is down to 35”. Also, my energy levels and weightlifting totals have not suffered.

However, I wanted to know how my LCHF diet was affecting my body on the inside. So I decided to see my M.D. for some baseline blood tests.

The tests I was most curious about were my cholesterol levels, especially my LDL-C.

Make no mistake about it.  A LCHF diet is a high fat diet. My diet is composed of about 70% fat from healthy sources like extra-virgin olive oil, avocados, pastured butter, organic coconut oil, wild salmon, aged cheese, and grass fed meat.

This type of diet, according to the American Heart Association, could raise my cholesterol levels and put me at a high risk for cardiac disease.

Even though I believe the AHA to be wrong in their assessment of fat, I was still eager to see how a LCHF diet affected my cholesterol.

My Doctor Reviews My Cholesterol Numbers

As my M.D. reviewed my numbers, I noticed his eyebrows starting to rise slightly. This was followed by a very concerned sounding, “Your cholesterol numbers are a little high.”

Before he could give me my numbers, I responded, “Is my LDL high?” He nodded.

Prior to my test, I had a feeling some of my lipid levels might be high. Often when individuals go on a LCHF diet total cholesterol and LDL can become elevated.

These are my numbers in MG/Dl units:

As you can see, my TC and LDL levels are high.

I knew what the climax of the sermon would be so before he could mention the”S” word, I stopped him right in his tracks.

“Don’t even say the word statin.” That was my response to my M.D.’s sermon of gloom and doom.

He immediately looked stunned. I’m probably one of the few patients who has ever rejected his advice to take statins.

He quickly recovered his composure and summoned one last warning, “But you’re at risk for heart disease.”

Slowly I explained to him that I don’t need statins because current research shows that when my LDL and TC numbers are considered in context with my other lipid levels (which are good), I’m not at a high risk for cardiovascular disease (CVD).

Obviously, he realized he was dealing with an informed patient so he didn’t pursue the issue. He simply said, “Let’s review the matter in three months.”

In my next post, I’ll explain why my cholesterol numbers don’t indicate I’m at risk for CVD.

Today, though, I’d like to explore why my doctor was so quick to suggest I go on statins.

Why Do Doctors Rush To Prescribe Statins?

Here’s the thing. Whenever mainstream medical doctors see high cholesterol levels and an LDL level over 190, their first reaction is to suggest that their patients take a statin drug. Statins lower cholesterol by blocking the enzyme in your liver that is responsible for making cholesterol.

This practice appears to be motivated by recommendations from the American College of Cardiology (ACC) and the American Heart Association (AHA).

These recommendations have resulted in millions of Americans taking statins and perhaps millions taking them needlessly.

That would mean that there are at least 45.6 million people taking statins.

While that number seems outrageously high, the Center for Disease Control (CDC) in 2015 stated that even more Americans should be on cholesterol-lowering drugs.

They believe that 44 percent of people ages 40 to 64 along with 80 percent of those 65 and older should be on statins. Did you get that? Eighty percent of everyone over 65 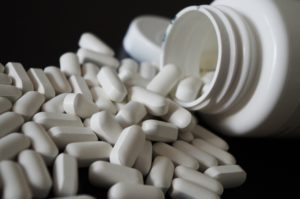 should be on a statin!

The CDC’s reason for the widespread use of statins is that they believe a huge percentage of the American population is at risk for cardiovascular disease (CVD), including the possibility of a heart attack.

Are the CDC, the ACC, and the AHA, however, correct in their assessment of this risk?

How Does Mainstream Medicine Determine Who Needs Statins?

The American College of Cardiology/American Heart Association suggest that individuals be treated with statins if they are at a high risk for CVD.

They define high risk people as those who:

It appears that these guidelines are what prompted the CDC to recommend that over 60% of all Americans over 45 be placed on statin therapy.

Before I explore whether the above guidelines are indeed indicative of a higher risk of CVD I think it’s vital to first consider the efficacy and safety of statin use.

It doesn’t matter what the guidelines are if the cure creates more harm than good.

Are Statins Really Effective And Safe?

Statins have often been called a miracle drug. This is because it’s claimed that they lower an individual’s risk of a first-time heart attack and reduce that person’s chance of developing CVD, while at the same time possessing no significant adverse side effects.

But Are those claims true?

Not according to a 2015 report in the journal of Expert Review of Clinical Pharmacology authored by David M. Diamond and Uffe Ravnskov. Diamond and Ravnskov examined several clinical trials that reportedly confirmed the effectiveness and safety of statins. 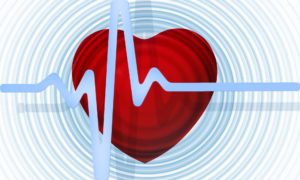 After an in-depth review of the literature, they found that while,

…statins are effective at reducing cholesterol levels, they have failed to substantially improve cardiovascular outcomes.

In other words, the health claims that drug companies make about statins are false.

Diamond and Ravnskov show that statin advocates often use a statistical sleight of hand in order to make statins appear to be successful in reducing heart disease.

Let me illustrate the difference.  Suppose we want to do a 5-year trial to see if a statin can 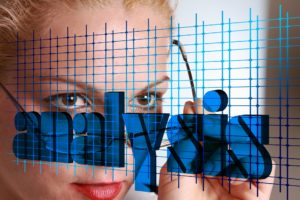 prevent heart disease. In this trial, we include 2,000 healthy, middle-aged men. We then administer a statin to half the participants and to the other half we give them a placebo.

At the end of our hypothetical trial, we find that 2% of the placebo-treated men (a normal occurrence in most trials) and 1% of the statin-treated men suffered a heart attack. We can thus conclude that statin treatment has benefitted 1% of the treated participants. This is the ARR.

So we could construct a headline that reads,

“News Alert: New Miracle Drug Reduces The Risk Of CVD By 1% In At Risk Individuals!”

Now, that’s not a very impressive headline. Would it convince you to take a statin drug?

Let’s, however take a look at relative risk reduction. RRR is determined by dividing the ARR by the control event rate (the placebo group).

For example, the ARR is 1 and the control group contains 2 people who suffered a heart attack. To find the RRR we divide 1 by two and come up with 50%.

We can now write a new headline that says,

Now that’s a lot more impressive sounding, isn’t it? That kind of headline could generate a lot of sales for statin drug manufacturers.

The results of the trials led researchers to ecstatically declare that statins can significantly reduce the chance of a heart attack and CVD.

The makers of the popular statin Lipitor even advertised that it could lower the risk of heart attack in at-risk populations by 36 percent. 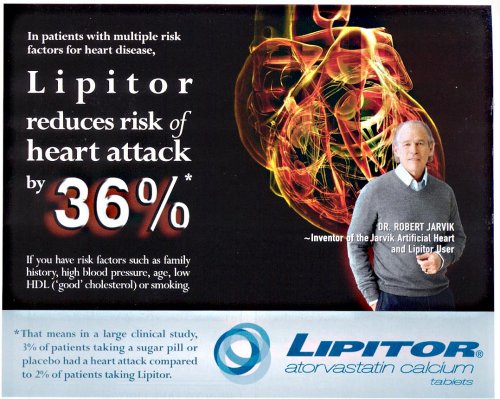 However, Diamond and Ravnskov discovered that when ARR data was used instead of RRR data, the risk of a heart attack was reduced by only 1.1 percent.

Notice the caveat at the bottom of the Lipitor advertisement.

In the trial concerning the statin Crestor, “public and healthcare workers were informed of a 54 percent reduction in heart attacks, when the actual effect in reduction of coronary events was less than 1 percentage point…”

Overall, Diamond and Ravnskov found that when the three major statin trials were analyzed from the perspective of ARR, only a 1-2 percent reduction of heart attack or CVD risk was achieved.

So when your doctor suggests you take statins because your cholesterol is a little high, he should remind you that your chance to avoid a nonfatal heart attack during the next 2 years is about 97 percent without treatment, but you can increase it to about 98 percent by taking a statin every day.

Not very impressive, is it?

Oh, and he should also remind you that with that 1 percent benefit, you might suffer some severe adverse reactions.

If you want to see Dr. Diamond explain his findings on statins, click here.

While many doctors downplay the adverse reactions of statins, this 2008 review in the American Journal of Cardiovascular Drugs analyzed almost 900 studies and found that adverse effects from statin drugs are “neither vanishingly rare nor of trivial impact.”

Statin therapy has been associated with increased rates of the following disorders:

The American College of Cardiology in a 2016 report does admit that there are adverse effects associated with statin therapy. However, they say the occurrences are rare.

Yet, in the above-mentioned Expert Review report, the authors show that the way statin researchers measure the risk of adverse effects is also flawed.

Diamond and Ravnskov argue that when it comes to assessing the adverse effects of statins, researchers should focus on relative risk instead of absolute risk. The major statin trials primarily assessed absolute risk.

The two authors found that ignoring the relative risk of adverse effects, “minimizes the appearance of their magnitudes”, and adverse effects are “either ignored or explained away as chance occurrences.”

The reality, however, is that statins actually produce only small beneficial effects on CVD outcomes, and their adverse effects are far more substantial than is generally known.

Atherosclerosis is the formation of plaques within the coronary arteries. These plaques can break off, block the artery, and cause a heart attack.

A recent report in the journal Expert Review of Clinical Pharmacology has suggested that statin use might actually cause atherosclerosis.

The authors suggest that statins may cause coronary calcification by:

As we have seen, statins may not be the wonder drugs they’re reported to be. While they do reduce cholesterol they don’t seem to significantly improve an individuals risk of CVD and are often accompanied by some serious adverse side effects.

So, with my total cholesterol and LDL being high, should I have assented to my doctors advice and accepted a prescription for a statin?

That decision ultimately depends on whether my cholesterol numbers actually put me at risk for heart disease.

Next week, I’ll take a look at that risk. I think you’ll see that my initial reaction to statins was the right one.

That’s it for this week. I’d love to hear what you have to say.